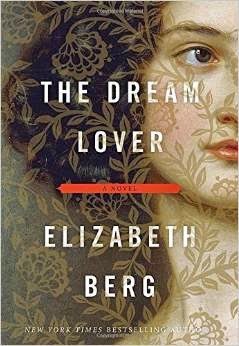 Note: I was given an e-copy of this book through NetGalley in exchange for reviewing it. As always, however, all thoughts and opinions are my own.

I was very anxious to dive into the Elizabeth Berg's novel The Dream Lover: A Novel of George Sand as I've been a fan of Berg. However, I have to say I was disappointed in this book. Mind you, it's not terrible - the book is okay, but it's not the book I expected from Berg.

This book is a historical fiction novel around the life of Aurore Dupin, a Paris author in the 1800's who wrote under the pen name of George Sands. It is clear to me that while Berg has taken liberties with telling Sand's story, Berg also did a lot of research into her life as well.

The first part of the book is split between two time lines. We flash back and forth between Aurore's childhood and then her early adulthood years. Eventually, the two time lines catch up and the book just moves forward from there.

The book felt slow to start to me. Unfortunately, I can't say I was hooked from the beginning. Though, it did get better as the book moved along - certain parts of the story line were more intriguing than others and those moved along quite well for me - Aurore's time with Maria Duval and Chopin.

That said, it was intriguing to learn about George Sand - even if parts are fictionalized. The life of a woman in 1800's France - with divorce being illegal, how Aurore walked around in men's clothing, and had many affairs. She achieved a sexual revolution that I think most people in 1960's of America were looking for. And through it all, the gossip, the scandal, the love found and lost and found and lost, she was France's first best-selling female author.

Her life is definitely worth looking at, and learning about. And while I didn't give this book 5 stars, I am glad I read it. And I think it is worth reading to learn a bit more about Aurore, aka, George Sands.

Thanks for leaving me a message! =)

Brandie
I'm a stay at home mom of 3 awesome kids - 2 girls and a boy. I am married to the most wonderful man alive. And I'm surrounded by so many wonderful people I'm beyond blessed. I love to make things. But now I have to fit in making between kicking cancer's @$$, being mom, wife, daughter, sister and friend. But I know I'll get through this - with lots of hugs, laughter, support and some knitting on the side! =)